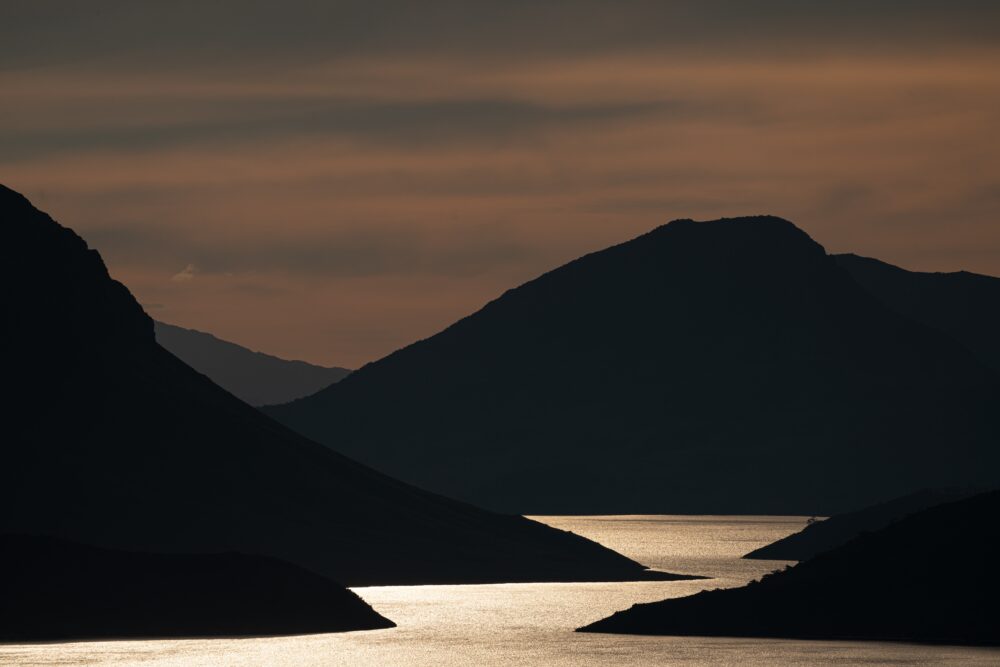 When I first went to what is now known as Lake Pedder, I had an eerie feeling looking out at the environment. I might have felt that way because I was truly in “big nature”, surrounded by large mountains, a huge body of water and trees as far as the eye could see. It’s the kind of nature that made me feel that I will be gone in the blink of an eye but that this landscape will be here forever.

But I think the unnaturalness of the environment also played a part in my feeling of eeriness. The Lake, now the second largest in Tasmania, looms large, as if it will rise up and swallow you. Its waters do not lap on stones and sand which it has worn away for thousands of years, into a perfect accommodating shape. It has the feeling of something lurking below the surface. And of course, as I now know, there is.

Almost fifty years ago, the still blue-brown waters and pink quartzite sand that was the iconic Lake Pedder slipped below rising waters. Plants and animals, like the Pedder Bristlewort, unique to the area, drowned as water flowed in. Humans had managed to sink a 10,000 year old glacial lake.

In 1967, it became clear that the Hydro-Electric Commission planned to develop a dam in the South-West region of Tasmania, near Lake Pedder, when the National Park status for the area was removed. The Hydro-Electric Commission and the Premier, known as “Electric Eric” for obvious reasons, pushed forward with these plans despite financial offers from the federal government aimed at preserving the area, strong resistance in the community and a campaign for preserving the lake, led by the Lake Pedder Action Committee. In 1971, the Huon and Serpentine Rivers were dammed, flooding Lake Pedder.

The first time I saw a photograph of the original Lake Pedder, I was taken aback by its beauty. A stunningly still lake, with an edging of sand, surrounded by mountain peaks and trees. It’s just as scenic as any of the other great wonders in Tasmania – Dove Lake, Wineglass Bay, kunanyi/Mount Wellington and Lady Barron Falls. I felt an overwhelming feeling of loss that the lake was forever changed, and that I would not get to experience it like I have the other beautiful natural places in Tasmania. I thought ‘this would never happen now’.

But my feeling that our natural places are protected, and would be defended if they were threatened, stems from the loss of Lake Pedder. The drowning of Lake Pedder showed activists that the traditional means of campaigning such as public meetings, protests and information campaigns would not protect a place when the bulldozers rolled in. In the end, members of the Lake Pedder Action Committee were left simply to sit in boats on the Lake as waters rose, trying to save what parts of the unique environment that they could. This loss informed the tactics of subsequent campaigns across Australia to protect the environment – most prominently that to protect the Franklin River. In 1978, when the Hydro-Electric Commission initiated plans to dam the Franklin River, activists were ready to use direct action tactics alongside traditional tactics, creating a blockade which saw 1,217 people arrested and the river saved.

Even as campaigns for the environment progressed and evolved from the loss of Lake Pedder, the fight for the lake did not disappear when the lake itself went underwater. In 1994, the Pedder 2000 campaign was created in order to push for the restoration of Lake Pedder by 2000. Recently, the campaign to Restore Pedder has taken off again, convened by Christine Milne and supported by Bob Brown, Paul Thomas and Todd Dudley.

The group has commissioned research which provides strong evidence for the restoration of Lake Pedder. They have shown that the original pink quartzite sand is still intact beneath the water and that the Lake could be returned to its original form. They’ve considered the environmental impacts of restoration on the flora, vegetation and platypuses, as well as the legal, social and economic factors. They’re even currently developing a full restoration management plan and exploring options for the decommissioning of the Gordon River Dam.

While it’s been fifty years since Lake Pedder was flooded, now is the right time for its restoration. The United Nations Decade of Ecological Restoration began this year, and aims to promote the restoration of ecosystems which is drastically needed to protect against climate change and species extinction. In this context, the restoration of Lake Pedder could provide an important symbol as we fight against climate change. If we can write the wrongs of the past and reverse the tide of industrialisation at Lake Pedder, then we can protect our significant natural places like the Great Barrier Reef from the industrial carbonisation of our atmosphere. Maybe we, unlike those who watched the waters rise and swallow Lake Pedder, will not have to watch our beaches be washed away by rising waters fuelled by climate change. And maybe we’ll be the generation that will get to see the waters in the southwest wilderness drain away, and sandy beaches of Lake Pedder once again greet the sun.

You can find out more about the campaign to restore Lake Pedder at https://lakepedder.org.