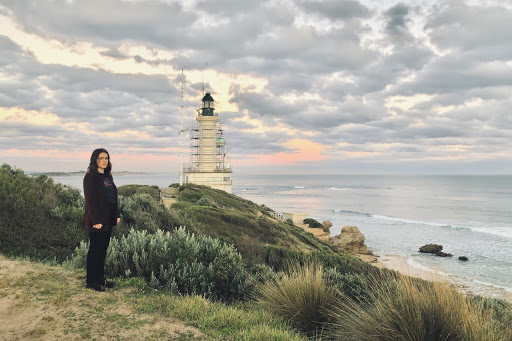 Third-year music student LJ Parks, is making waves across Australia with two versions of her song Hobart, rapidly climbing up the charts in the Campus Music Competition. The aspiring musician is the only student representing the University of Tasmania (UTAS) at this competition in 2021 and hopes to showcase the talent her island home has to offer to other competitors and the general public.

LJ says that “it doesn’t matter if you study music or medicine, if you create original music and are enrolled at an eligible institution you can enter,” with past winners including well-known bands Spiderbait, Ball Park Music and Peking Duk.

The chance to share her music and talents on a wide scale allows LJ to “not only help boost my online artist presence but bring home some glory to UTAS! Most of the other entries are from the mainland or NZ, so I want to able remind people that we’re still here and making noise.”

The newly renovated Hedberg building in the city’s centre, provided LJ with the perfect facilities for her to reach her full potential as an artist, as the new state-of-the-art equipment allowed her to collaborate with other students to create two versions of her song Hobart. The Hedberg was the nicest space I’ve ever recorded in, LJ said .

“The major recording studio is amazing. The main recording console is enormous and state of the art. I’m pretty sure it’s worth as much as a small house. Having access to the facilities at the Hedberg was wonderful.”

The recording spaces and studios allowed LJ to feature the talents of other students in her song Hobart, as well as create an acoustic version using an arrangement she created at the Hedberg.

Inspired by missing life in Hobart, as she spent time with her family in Victoria during the Covid-19 lockdown, LJ decided to “put all of my thoughts and feelings to music” and create a song that reflected how she felt about her home town. After returning to Tasmania, LJ was able to play the first draft of her song to her classmates and begin to receive feedback with the help of her song-writing class tutor Dave Steel.

“Everyone seemed to genuinely enjoy the song, and I received a few good suggestions of things to add to it. When the song was done, I recorded the acoustic version with my guitar and vocals.”

Creating another version of her song Hobart with the help of other students at the Hedberg, took her music to another level with LJ finding that, “the band did such a great job with the song and took it in a different direction than I would have on my own, but I’m in love with the results.”

The Campus Music Competition has become the perfect stepping-stone for many Australian artists to launch their careers over the past 30 years, and LJ wishes to follow in their footsteps by using this platform to share her music and begin to promote her talents.

As for the future, LJ hopes to work within the music industry, she knows that “it can be hard to break into it as an emerging artist.”

Winners are selected several times a year and are gifted with prizes that support their musical aspirations- currently a $1000 music store voucher.  LJ has both the studio version and acoustic version of her song Hobart currently ranking at number 6 and 7 respectively, and hopes to use the platform to “share my music with more people than previously possible.”

Votes can be cast online at the Campus Music Competition website with voting closing on June 30th, as LJ Parks showcases the talent that UTAS has to offer and hopes to make her state proud.