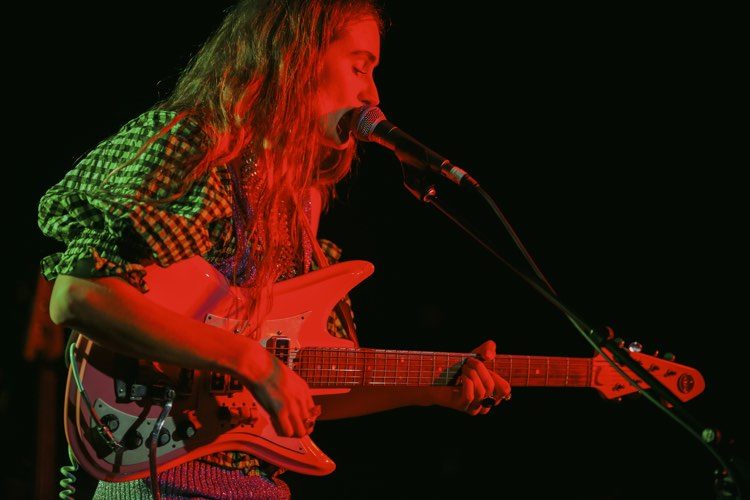 Lasca Dry is a young singer/songwriter from Ulverstone, Tasmania. In this interview, we chat about her love for the ‘60s and ‘70s, her style inspiration and what it means to be a Tasmanian musician.

At the beginning of March 2020, I was standing at the front of the stage waiting to see Weyes Blood. To my surprise, a lady wearing a green Bardot top paired with a glittery singlet and matching flared pants walked on stage. I instantly loved her style. She looked like a groovy disco ball. She began to sing and strum her guitar. Her voice was dreamy and soft. She reminded me of a young Joni Mitchell, with the looks of Mazzy Star’s Hope Sandoval. On her guitar case was her name: Lasca Dry; three syllables, perfect for a musician. It’s also a name that is easy to remember, so I instantly connected with her for an interview.

Sadly, due to coronavirus, I did not meet Lasca Dry in person as planned. We had to settle for a voice call. We kept ringing each other at exactly 1:15pm, so it took us a while to get through. Finally, I answered her call and I heard her say softly, “Hi.”

I thought Lasca Dry sounded like a stage name, but it is in fact her real name. It is as though her parents set her up to become a musician. Lasca told me that the origin of her name stemmed from her father’s side.

“It was a name that my great-grandma used to tell stories over the radio to the sailors. Then, when she had a daughter (my grandmother) she called Lasca.” Lasca explains that her grandma did not like the name, so she went by Sally. However, after Lasca’s mum found out Sally’s real name, she instantly loved it.

Lasca loves performing in her home state, since there is less competition and more opportunities than you would think.

“I find Tassie really peaceful. If I am in Melbourne, there’s so much to see and so many musicians that you end up just looking at what other people are doing. That’s why I love Tasmania, because it’s kind of slow and I’m a bit of a slow person, so I can just chill about and play music.”

Lasca has performed with national artists, international artists and at Falls Festival. However, her favourite gig so far was at MONA (the ‘Museum of Old and New Art’) in Berriedale, north of Hobart.

“I was a bit nervous for it, but it ended up being one of my favourite gigs because I played in… I don’t even know what the room is called, but you know where all those A4 pictures… there are thousands of them on the wall and they are all colorful.”

“Yes, the snake, I got to use this amazing microphone and I just felt like I was like a cave angel.” I could imagine Lasca’s voice echo through the art gallery and patrons stopping to listen. “I had freedom to do whatever I want. I just jammed for so much of it and it was awesome. I made stuff up on the spot. It was the best. I loved it.”

Not just a talented singer, Lasca also writes her own songs. When she feels like writing a song, she just picks up her guitar and starts playing.

“Whatever mood I’m in determines what chords I’m feeling in the moment, and then I will start coming up with melodies at the top.”

Lasca also experiments with composition, because she likes to figure out new ways of songwriting in her ongoing evolution as a musician.

“One thing I’ve been doing is writing down the lyrics first, and getting two songs that are already songs and basing a song around that.”

Lasca gets inspired by whatever emotions she is feeling or random things, “like a tree,” she laughs.

Lasca’s music has a calming and unique sound, which she describes as “very heavily inspired by the ‘60s and ‘70s with a hint of indie folk.” She channels Led Zeppelin in her music, her favourite band.

“I think the reason why I sound so ‘60s and ‘70s is that all the music that I love is from that time.” Lasca adds that she can’t put her finger on what it is about music from this period that just resonates with her.

She describes herself as a “big dresser-upperer.” and maintains a unique style.

“I am inspired by my younger self, and what my younger self wanted to wear.” Her flamboyant style is part of her image, gives MONA’s Snake a run for its money.

The creative stamina that Lasca possesses seems never-ending. A longtime multi-instrumentalist, she plays guitar, piano, autoharp and violin. She also has started teaching herself the drums. Lasca is also what the biz calls a ‘triple threat’ (she can sing, dance and act). Still, musicis her priority at the moment.

“I love all of those things, but for so long so many people kept telling me ‘you need to do one thing’ or ‘you need to get really good at one thing,’ which I don’t really believe anymore.”

The multi-hyphenate talent adds that she focuses on music more than anything, but her other interests are not ‘less important’.

With everything going on right now, Lasca’s music career has been affected by coronavirus. She has stopped busking and getting gigs.

“Before the Coronavirus started, I would busk almost every day in Ulverstone, and that’s a huge part of my income.”

However, Lasca remains optimistic and thinks of the pandemic restrictions as an advantage as well as a challenge.

“It has been really helpful because you can’t leave your house. I’ve been writing more and learning more about my instruments, so it’sbeen a negative but also a positive.”

“I am a huge fan of solos. I think the live version of the solo is better than the one on the album. I’m just obsessed. I am definitely going down a Pink Floyd obsessiveness.”