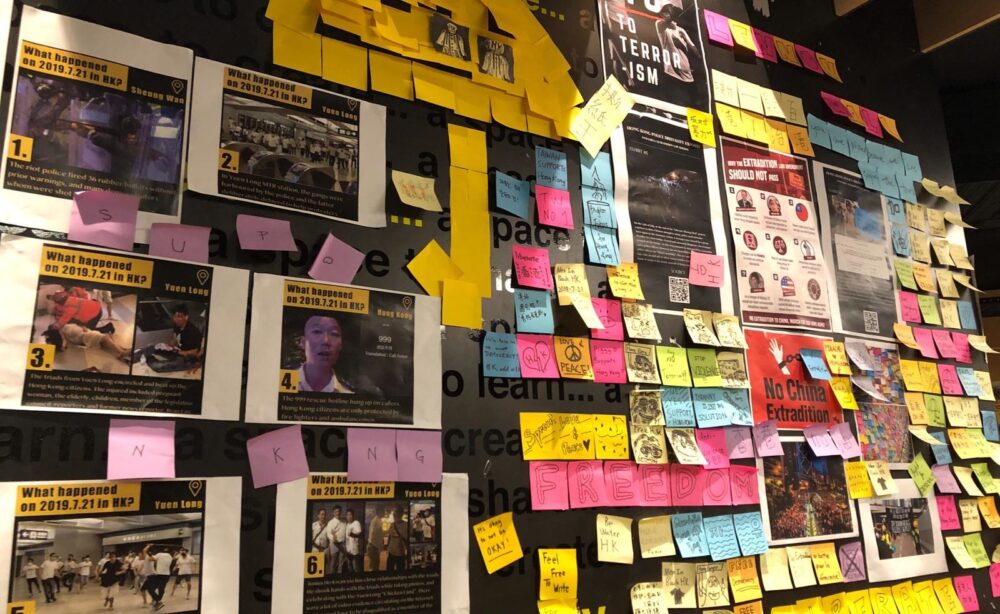 A wall of pro-democracy posters have been removed at the University of Tasmania, following growing tensions between Hong Kong and China.

The ‘Lennon Wall’ display in the Student Lounge at Sandy Bay campus, which featured messages for “peace” and “freedom” after widespread protests in Hong Kong against mainland Chinese influence, was taken down by one student late on Wednesday night.

The incident follows reports from other Australian universities, where similar displays have been removed.

Togatus has obtained WeChat messages where comments have been made towards pro-Hong Kong students, including several from a student who claims to have taken down the display.

Some of those in the chat mentioned the need to respect freedom of speech and suggested hanging their own posters instead.

Togatus understands a security camera in the lounge captured the incident and that the University is aware of the identity of the student responsible for the removal, since an ID card is required to access the Student Lounge after-hours.

Following the incident, students have approached Togatus to express concerns of losing their freedom of speech on campus.

“I hope Australia will never end up like Hong Kong — having to protest and face violence just to have their voices heard,” one student told Togatus.

“One thing that makes me and my friends concerned would be some students trying to  destroy our work just because they disagree with our opinion.”

The revelation comes a week after pro-Hong Kong and pro-China students clashed at the University of Queensland during a protest against Hong Kong’s proposed extradition law.

It is understood the group of pro-Hong Kong students intend to reinstate posters around campus in response.

A University spokesperson said they were aware of the situation.

“The University is looking into this matter,” the UTAS spokesperson said. “The protection of freedom of speech on university campuses is paramount.”