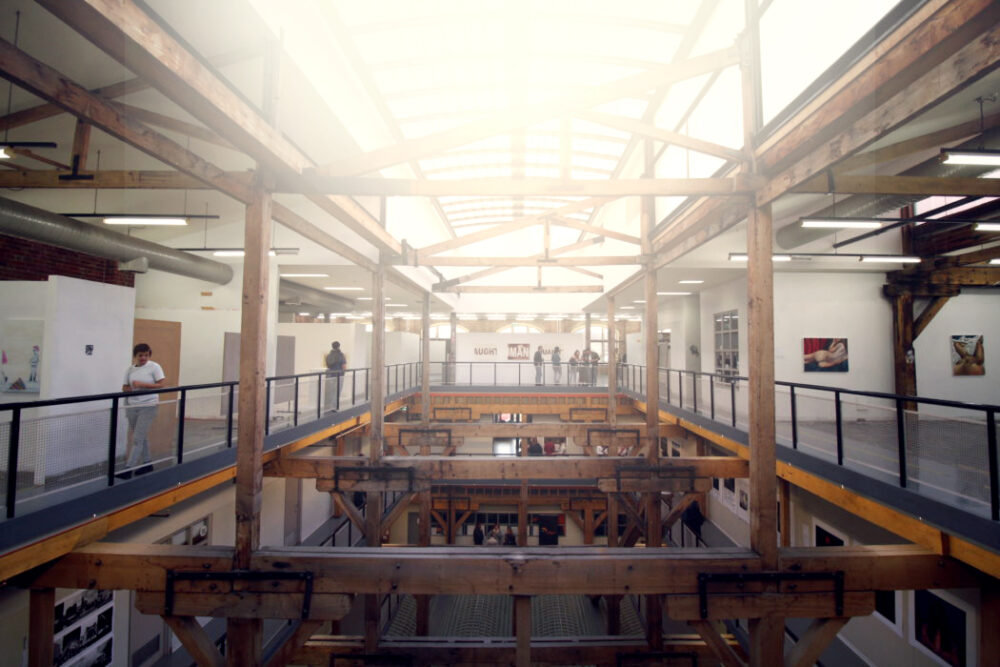 The S.C.A.M. of Hunter Street

“Where are our teachers?”

“Why is no one talking to us?”

“Why aren’t you listening to us?”

“The art school is a joke.”

These were the pleas and frustrated statements that echoed the sandstone walls of the art school in 2018. This was my final year studying on the arts campus, which I once thought of as a pink palace of creative collaboration. But for myself and others who attended the institution over those toxic twelve months, it was the year of unrest: the year of student dropouts, staff cuts and collective frustration. The School of Creative Arts and Media (which was once ironically shortened to the acronym SCAM), rapidly mutated from a respected education facility to a place of scandal, investigations, student protests and institutional disgrace after serious concerns and issues became publicly known.

During 2018 there were several periods of time where there was no Head of School. Students were left with a revolving door of people acting as the Head, who were inadequately prepared to deal with the serious issues. This lack of management and public face for students to speak with made it impossible to get any trustworthy answers from the institution about our concerns.

It became known to students in semester two that there was an ongoing investigation, which impeded several quite senior members of staff from doing their jobs, and this was shrouded in secrecy. Word of the investigation spread to outside the university, to the point where uninvolved Hobartians were asking me and my peers, “What on Earth is going on at Hunter Street?”.

I tried to piece together a convoluted mess of rumours and whispers, and met up with Art School Student Rep, Abbie Rothery, and asked her what she thought were the main changes and issues occuring at the school.

“We started to hear that technicians’ hours would be changed and decreased, that our studio time would be even further limited.” In Abbie’s opinion the changes in technician staffing were “most likely budget cuts proposed under Peter Rathjen’s leadership when Kit Wise was our Head of School.”

One of the biggest fears for students was the possibility of losing essential technical support staff. These staff work in all areas of Fine Arts, and oversee working with advanced machinery, industrial printers, specialist studios and any practise that requires expert supervision. They also serve as industry professionals with whom the students can seek invaluable guidance about their projects. Without access to crucial staff, students are unable to continue their creative practise because without supervision, the equipment and spaces are off limits.

The school held information sessions in an attempt to manage students’ rising suspicions before things got out of hand. It didn’t take long before these small sessions of just a few students in a quiet classroom, grew to a full lecture theatre of protesting, complete with banners, arm bands and shouting.

In August, Tony de Silva (acting Head of Faculty during that particular month) held a Q&A seminar with students. He began the session by stating he was new to the role, and unaware of the depth of issues occurring at the campus. Immediately, students began voicing their fears.

Tony responded by stating that students “have had access to the technicians whenever they want, but that’s not necessarily a good thing. They are overworked, and that is not good.”

An honours student from sculpture stood and said, “We understand that UTAS is a business and needs to hire people who will be good at their jobs. But there is also an expectation from students that we get what we’ve paid for in our degree.”

Students spoke the names of their loved technicians as a plea to save their jobs and to relay the importance of these teachers to their degrees. Tony responded with the unbelievable line; “The names of these people is irrelevant.”

An anonymous student responded, “You mention that there are conversations that go on, but we haven’t been part of it at all. We have paid our fees, and things have changed, but we have not been consulted. We are not treated with respect. Our future lives depend on what’s happening right now. I work in metal, and have planned a big project, and now I don’t know if I can continue that project due to the fact teachers may be fired. We have all had a lot of frustration — I can’t do what I wanted to do because of the uncertainty.”

This situation compromised students’ projects and research and led to conflicts of interests on assessment panels, which in turn, decimated the sculpture studio. There were huge impacts on the mental health and relationships of students, made worse by the constant misinformation and distrust of the university.

After the unsuccessful meetings, we realised how little sympathy UTAS had for its staff. An anonymous group of students created a petition to publicly voice their fears. ‘The Collective Concerns’ document was posted on corridor walls, the back of toilets, and shared between students in classes. The truth was out, and everyone knew not only about the art school issues, but also the inadequate communication from UTAS higher-ups.

Key issues outlined in the petition were the uncertainty of technical staff members’ jobs, the suspension of essential teaching staff in the sculpture department, the lack of kindness given to students after appropriately lodged complaints were made, and concern for a ‘culture of political manoeuvring within the staffing body’.

It also acknowledged the devastation felt in the student body when at least two staff members were suspended from teaching for the pending investigation, leaving the entire sculptural honours cohort without a supervisor at the halfway mark of their year-long projects. An anonymous student of third year student confirmed to me that “issues in the second semester meant that all but one of those honours students dropped out or deferred.”

The first round of the petition was delivered via email to UTAS Management in early November with over 220 signatures. According to those who wrote the petition, the signatures continued to climb, which led to a massive amount of momentum for the cause. The Mercury and ABC began to contact students for further info and suddenly, the Art School was in a very public spotlight.

After Collective Concerns was published additional information sessions were held including one where Tony de Silva returned to speak, accompanied by Professor Kate Darian Smith, The Executive Dean of The College of Arts, Law and Education. Kate spoke of the University’s complete unwillingness to comment on or provide any transparency around the matters affecting the art school. She spoke of ‘natural justice’ and, in particular, protecting the suspended teachers’ privacy. Her statements exuded incompetence and self-interest. However, UTAS has not protected anyone, but instead has chosen to save face in almost every situation. The University needs to take responsibility by reviewing the ethics and inadequacies of their actions.

Once again, students were left with no trustworthy answers on the future of how their studies would progress at the school. Kate promised students at this meeting there would be communication once the investigation was resolved, and a formal apology would follow. To this day, no apology has been given from UTAS to the affected students, and instead they remain left with massive honours degree debts and no alternative for fine arts degrees in Tasmania.

In a spectacular rupture from the institution, a group of students who dropped out, deferred or were compromised by the unexplained loss of their supervisor made their own graduate exhibition. ‘Dishonours’ was held at Visual Bulk gallery in Hobart. At the event, the students toasted “a cheers for our wider art student community, a nod to the Hobart ripple effect, a salute to progressive artistic practice, and a rally for critical dialogue.”

Today, the conversation continues in lecture theatres… “What happened?” “Did any good come from all this heartache?”. It seems few people have any idea. But my advice for current fine arts students is this: when they don’t listen, speak louder. Make good art and don’t be afraid to stand up for what is right. We own our education, not the institution.